Note: Since I’ve written this article, the surge system has changed to a zone system. Overall, I don’t think it’s as favorable to drivers as the old system. Read more.

SURGE — it’s what makes Uber worth it for me. On this page, I’ll explain SURGE, tell you where to go for SURGE, and show-off some of my SURGE earnings :).

You can make A LOT of money driving part-time for Uber! However, it’s important to know fares are not guaranteed — you need to go out when there are a lot of requests for rides but not enough drivers around. When this happens, there is SURGE, or an increase in the fare.

First, how does SURGE work?

Understand SURGE: it’s an increase in fare for the rider (and increased pay for the driver) when the demand for rides is much greater than the free drivers in the area.

You probably heard about SURGE caps in the local news and concerns about how it’s like price gouging. This is because at times, it feels like Uber and drivers can be taking advantage of people. This is maybe 30% right, 70% wrong. I’ll explain:

SURGE is actually used to create balance — imagine during the days before Uber — when a major event at the Blaisdell finishes and everyone calls a taxi. Well, the taxi company will get calls and dispatch taxis… but it’s first come, first serve, and when there’s so many requests, those people will basically need to wait and wait. With Uber SURGE, what happens is that drivers will go onto their app and see this:

When I open my app and I see that, my face looks like: 😲 and I try my best to get to the red zones. 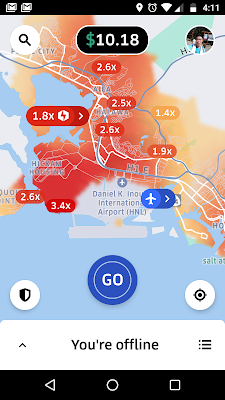 A LOT of drivers will be thinking the same thing as I do, and as all the drivers head to the SURGE zones, the SURGE actually lessens or dies down because of all the new riders.

MOST IMPORTANTLY IS THIS: It’s not unfair for riders because they are told the estimated fare with SURGE. They can also choose to use a taxi or TheBus instead. Or, they can choose to wait around until the SURGE finishes.

Here’s my good advice: don’t chase SURGE. If you’re at home in your boxers and messy hair when SURGE hits, by the time you get to the SURGE zones, it will likely be gone. A lot of riders will just wait out SURGE and a lot of drivers will chase SURGE, thus SURGE NO MORE.

Instead, know when and where there will be a lot of ride requests and be working and ready.

Here’s a photo from Uber Hawaii that shows you the best times to drive:

In addition, it’s going to be the Pearl City/Aiea and the Ala Moana/Waikiki areas that will need a lot of drivers.

Third, know what big events and attractions are happening

Uber compiles a list of events that are happening in the state here. This includes sport events, performances, entertainment, and fights. Unlike festivals, with events, there’s going to be a start and end time. This means there will be a lot of people looking for rides to and from the event around the same time, resulting in SURGE. Uber is actually great for this, because a lot of these places have expensive parking and can run out of parking!

Tip: plan your driving schedule and make sure that you will be in the area at the closing of the event at least once — so you’ll be guaranteed one SURGE fare!

Lastly, here are examples of high earnings I’ve made thanks to SURGE

When you work the party weekend shifts like I do, you will eventually get a nice long trip with surge. The biggest way to make good money is to have a  lot of miles and avoid traffic. Here, I had a group of young, drunk military friends who wanted to get home all the way in Kaneohe. It’s actually not too bad for them when the fare is split 4 ways. They left a mess, so Uber charged them another $20 and gave it to me! 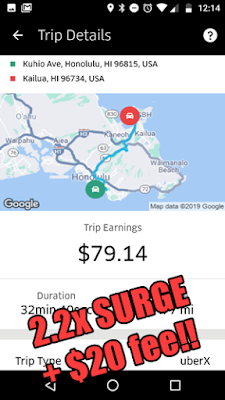 Take advantage of any promos or bonuses they give you!

Sometimes Uber will give out promos or bonuses to make driving like a game for you. In the above case, it was 20 rides = $100 bonus. I wanted to get the bonus, so I stopped being picky with my rides and started accepting all rides in Waikiki, hoping to quickly get to 20 rides.

Be nice to your riders and be friendly!

If you chat and make a bond with your rider, they are more likely to give you a positive review, compliment, or best of all, a TIP! This is a ride I did during SURGE time in the late evening. I talked with her about podcasts the entire trip. Thanks for the tip! Even better: I was able to do an airport ride and head right back into town with no wasted gas! 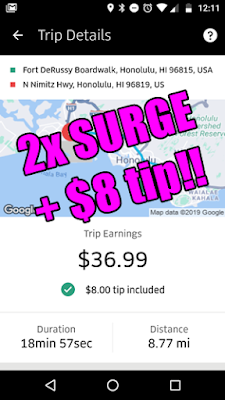 Small trips during SURGE are okay!

I picked up this person on his way back from the grocery store. It was a really short trip, but it kept me near Waikiki and of course, I already had a request before I dropped him off! 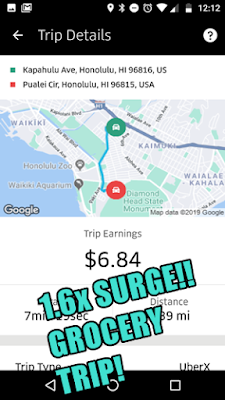 Drive on Holidays and Festivals

Here is a great fare I had with two funny dudes who just got off a choppy catamaran ride on New Year’s Eve! That’s a lot of SURGE! 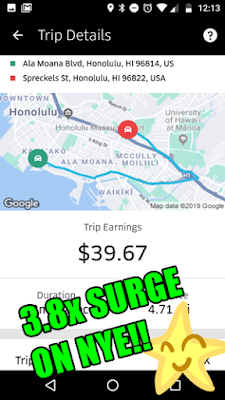 Every once in a while, you will receive a very drunk person who really wants to get home. Keep in mind that all passengers are shown the estimated fare, so it should not be a surprise to them. With this passenger, they told me one place (Fort Shafter), but it was actually in Wahiawa (Schofield Barracks). Anyway, with the SURGE, this turned out to be my best fare, even if I did need to drive back into town! 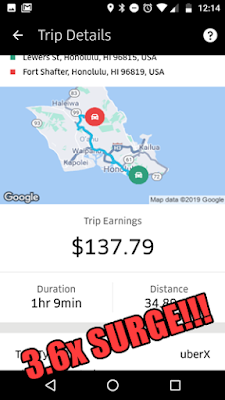 Ready to sign up to be an Uber Driver? Use my link and receive a bonus or guarantee! (Code: wd3ng). You’ll also be supporting my website here!

Get The Hawaii Plan Updates!

Show your love for this beloved Hawaiian snack with this custom design! Available in men’s, women’s, and kid sizes! Light or dark.

Get $40 Credit with AirBnB!

Where Can I Find Cheap Flights to Hawaii?

What the Heck is Spam Musubi!?

This website, TheHawaiiPlan.com, is a participant in the Amazon Services LLC Associates Program. TripAdvisor Affiliate Program, and Airbnb referral program. These are affiliate advertising programs designed to provide a means for sites to earn advertising fees by advertising and linking to the respective sites. Don't worry, any clicking of affiliate links will not result in any additional cost to you.